The nroff formatted source file to the man page for the curl command line tool was some 110K and consisted of more than 2500 lines by the time this overhaul, or disentanglement if you will, started. At the moment of me writing this, the curl version in git right now, supports 204 command line options.

Working with such a behemoth of a document has gotten a bit daunting to people and the nroff formatting itself is quirky and esoteric. For some time I’ve also been interested in creating some sort of system that would allow us to generate a single web page for each individual command line option. And then possibly allow for expanded descriptions in those single page versions.

To avoid having duplicated info, I decided to create a new system in which we can document each individual command line option in a separate file and from that collection of hundreds of files we can generate the big man page, we can generate the “curl –help” output and we can create all those separate pages suitable for use to render web pages. And we can automate some of the nroff syntax to make it less error-prone and cause less sore eyes for the document editors! 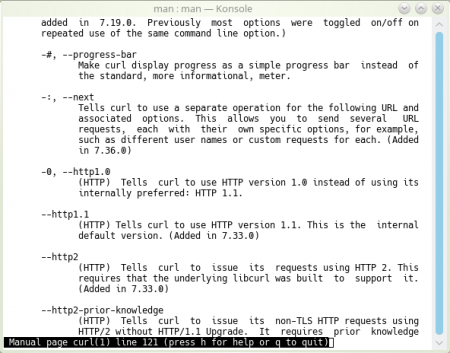 With this system we also get a unified handling of things added in certain curl versions, affecting only specific protocols or dealing with references like “see also” mentions. It gives us a whole lot of meta-data for the command line options if you will and this will allow us to do more fun things going forward I’m sure.

You’ll find the the new format documented, and you can check out the existing files to get a quick glimpse on how it works. As an example, look at the –resolve documentation source.

Today I generated the first full curl.1 replacement and pushed to git, but eventually that file will be removed from git and instead generated at build time by the regular build system. No need to commit a generated file in the long term.