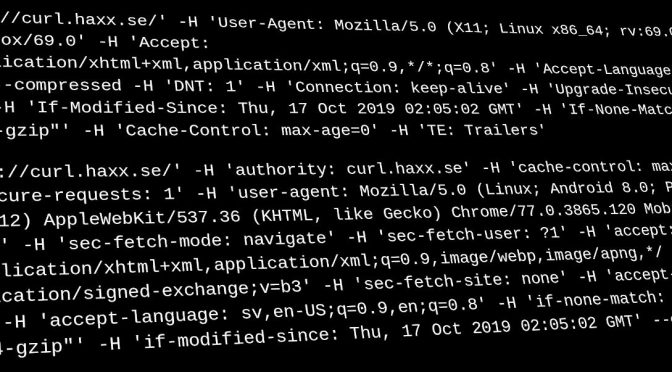 The --write-out (or -w for short) curl command line option is a gem for shell script authors looking for more information from a curl transfer. Experienced users know that this option lets you extract things such as detailed timings, the response code, transfer speeds and sizes of various kinds. A while ago we even made it possible to output JSON.

Maybe the best resource to learn more about it, is the dedication section in Everything curl. You’ll like it!

In curl 7.75.0 (released on February 3, 2021) we introduce five new variables for this option, and I’ll elaborate on some of the fun new things you can do with these!

These new variables were invented when we received a bug report that pointed out that when a user transfers many URLs in parallel and one or some of them fail – the error message isn’t identifying exactly which of the URLs that failed. We should improve the error messages to fix this!

Or wait a minute. What if we provide enough details for --write-out to let the user customize the error message completely by themselves and thus get exactly the info they want?

Using this, you can specify a message only to get written if the transfer ends in error. That is a non-zero exit code. An example could look like this:

…. if the transfer is OK, it says nothing. If it fails, the text on the right side of the “onerror” variable gets output. And that text can of course contain other variables!

This command line uses -s for “silent” to make it inhibit the regular built-in error message.

To help craft a good error message, maybe you want the URL included that was used in the transfer?

If you get more than one URL in the command line, it might be helpful to get the index number of the used URL. This is of course especially useful if you for example work with the same URL multiple times in the same command line and just one of them fails!

The regular built-in curl error message shows the exit code, as it helps diagnose exactly what the problem was. Include that in the error message like:

This is the human readable explanation for the problem. The error message. Mimic the default curl error message like this:

We already provide this “variable” from before, which allows you to make sure the output message is sent to stderr instead of stdout, which then makes it even more like a real error message:

These new variables work fine after %{onerror}, but they also of course work just as fine to output even when there was no error, and they work perfectly fine whether you use -Z for parallel transfers or doing them serially, one after the other.