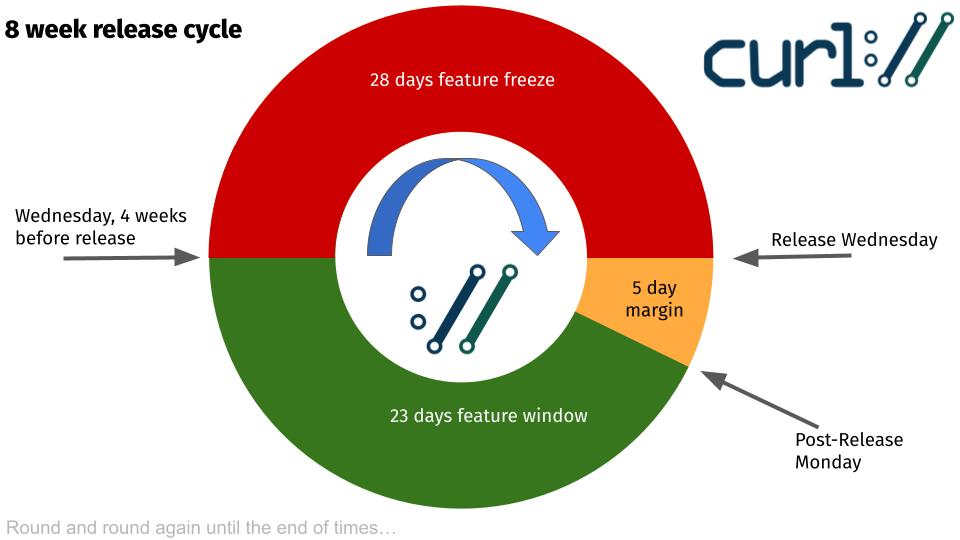 In the curl project we do timed releases and we try to do them planned and scheduled long in advance. The dates are planned. The content is not.

I have been the release manager for every single curl release done. 209 releases at current count. Having this role means I make sure things are in decent shape for releases and I do the actual mechanic act of running the release scripts etc on the release days.

Since 2014, we make releases on Wednesdays, every eight weeks. We sometimes adjust the date slightly because of personal events (meaning: if I have a vacation when the release is about to happen, we can move it), and we have done several patch releases within a shorter time when the previous release proved to have a serious enough problem to warrant an out-of-schedule release. Even more specifically, I make the releases available at or around 8 am (central euro time) on the release days.

The main objective is to stick to the 56 day interval.

It probably goes without saying but let me be clear: curl is a software project that quite evidently will never be done or complete. It will keep getting fixes, improvements and features for as long as it lives, and as long as it lives we keep making new releases.

We decided to go with a fixed eight weeks release frequency quite arbitrarily (based on past release history and what felt “right”) but it has over time proved to work well. It is short enough for everyone to never have to wait very long for the next release, and yet it is long enough to give us time for both merging new features and having a period of stabilization.

Timed releases means that we ship releases on the predetermined release date with all the existing features and bugfixes that have landed in the master branch in time. If a change is not done in time and it is not merged before the release, it will simply not be included in the release but will get a new opportunity to get included and shipped in the next release. Forever and ever.

I am a proponent of timed releases compared to feature based ones for projects like curl. For the simplicity of managing the releases, for long term planning, for user communication and more.

The cycle has three windows

Within the eight week release cycle, there are three distinct and different windows or phases.

The cycle can be said to start at the day of a release. The release is created straight from the master git branch. It gets signed, uploaded, blogged about and the news of it is shouted across the globe.

This day also starts the “release margin window”. In this window we still accept and merge bugfixes into the master branch, but we do not merge changes or new features.

The five day margin this speaks of, is that this window gives us a few calendar days to assess and get a feel for how the previous release is being received. Is there a serious bug reported? Did we somehow royally mess up? If we did an important enough snafu, we may decide to do a follow-up patch release soon and if we do, we are in a better position if we have not merged any changes yet into the release branch.

If we decide on doing a patch release, we skip the feature window and go directly to feature freeze.

If we survived the margin window without anything alarming happening, we open the feature window. On the Monday following the preceding release.

This is the phase during which we merge changes and new features in addition to the regular normal bugfixes (assuming there are any of course). Things that warrant the minor version number for the next release to get bumped.

The feature window is open 23 days. Ideally, people have already been working and polishing on their pull-requests for a while before this window opens and then the work can get merged fairly quickly – and presumably painless.

What exactly can be considered a change and what is a bugfix can of course become a matter of opinion and discussion, but we tend to take the safer approach when in doubt.

In the 28 days before the pending release we only merge bugfixes into the master branch. All features and changes are queued up and will have to wait until the feature window opens again. (Exceptions might be made for experimental and off-by-default features.)

This phase is of course intended for things to calm down, to smooth out rough edges, to fix any leftover mistakes done in the previous feature merges. With the mindset that the pending next release will be the best, most stable, shiniest, glorious release we ever did. With even fewer bugs than before. The next release is always our best release yet.

The release cycle as an image

(Yes, if you squint and roll your chair away from the screen a bit, it looks like the Chrome logo!)

The graph below shows the number of days between all curl releases ever done. You can see the eight week release cycle introduced in 2014 visible in the graph, and you can also easily spot that we have done much quicker releases than eight weeks a number of a times since then – all of them actually a sign of some level of failure since that means we felt urged to do a patch release sooner than we had previously anticipated.