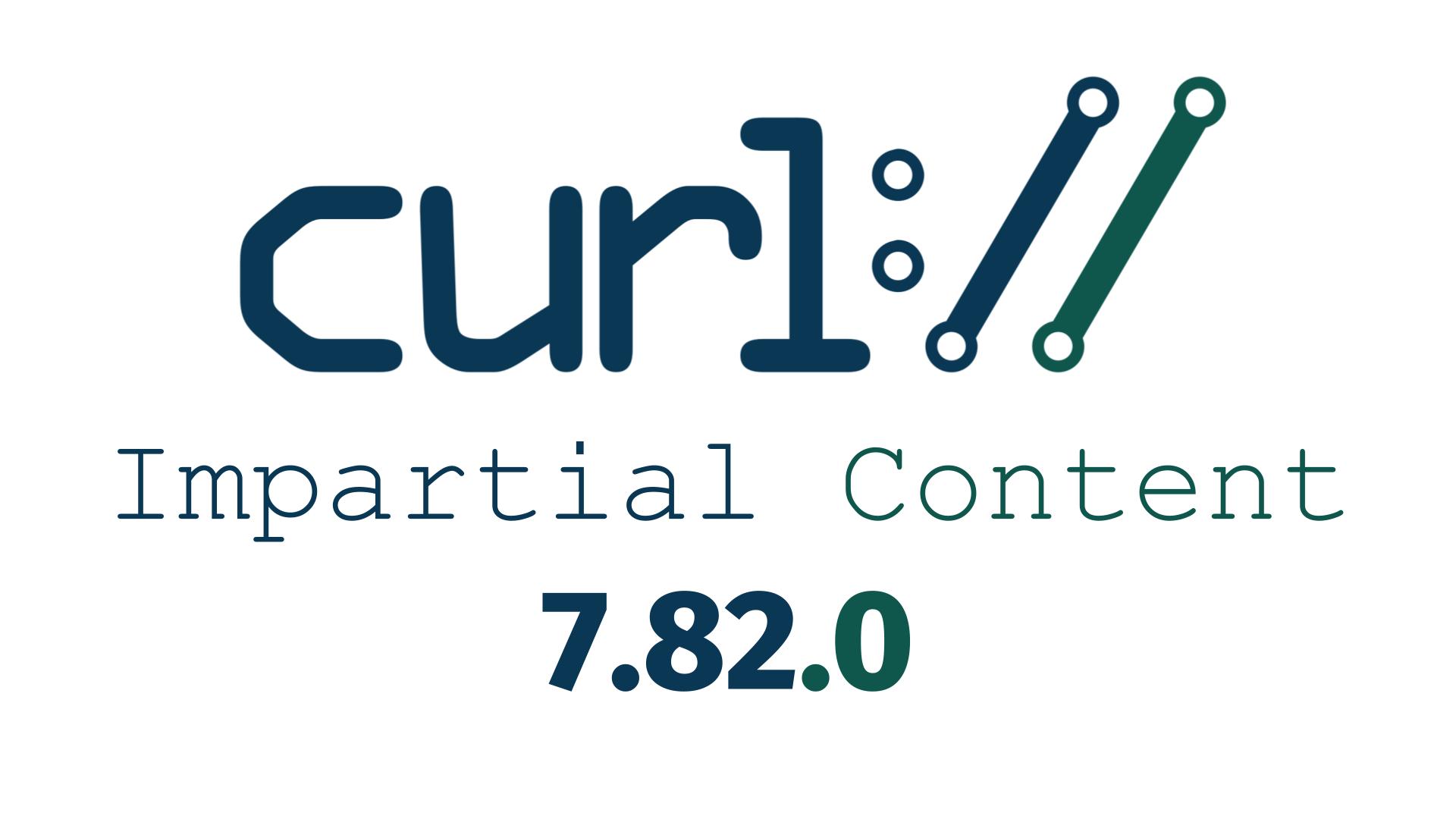 Welcome to the 206th curl release, 59 days since we shipped curl 7.81.0. The extra three days because I was away on the day the release would normally have been done. (I call it Impartial Content as a little play on the HTTP 206 response code message.)

There are only two changes this time around:

With the new --json command line option, curl suddenly made it more convenient to send JSON from command lines and shell scripts.

curl supports a crazy amount of different TLS libraries, but the amount was now decreased by one (to 13) as we officially drop support for MesaLink. The library is not developed anymore so we don’t want to encourage future users to go down that road.

Here are some of my favorite bug-fixes from this release cycle.

We landed three notable fixes for the bearssl backend which should make users of it happy. For cert expiration, incomplete CA certs and session resumption.

After I posted a library-call count to the mailing list that showed quite a large number of calls to strlen(), a cleanup race started that subsequently reduced the number of calls by over 60% in some use cases! Primarily replaced by compile-time constants.

To build curl with the NSS backend using configure, you now need to confirm this choice by also passing on --with-nss-deprecated to make it clear to users what the future looks like for our NSS support.

After a lengthy discussion we now hide even more command line arguments from appearing in ps output (on systems that support it). Since the hiding is done by curl itself, there is still a short moment during which they will be visible, plus that we cannot hide everything so there is still a risk that some argument might leak information unwillingly. That is the nature of command line arguments. Use the config file concept or stdin etc to work around that.

The TLS extension NPN is now marked “deprecated” and is scheduled for removal in six months unless someone yells very loudly and explains why not. This extension was once used to negotiate SPDY and early HTTP/2 but have no purpose these days. The browsers removed support for it several years ago.

The only pseudo header for HTTP/2 and HTTP/3 that couldn’t be modified by a user can now be changed at will.

Support for these platforms for which the code haven’t been modified for the last decade or so, and therefore are highly unlikely to still work, were dropped. After this, I had it confirmed that you can still build curl for vxWorks using the “regular” build!

After support for TPF was dropped, we took the next step and removed support for the charset conversion functions necessary to run curl on non-ASCII platforms such EBCDIC using ones. As TPF was the only/last platform such platform we supported, this cleanup improved lots of code paths.

A regression in 7.81.0 made curl_multi_assign() return error if used from a callback.

We landed several fixes in both HTTP/3 backends, improving the situation for everyone who plays HTTP/3 with curl.

reduce memory use when FTP is disabled

After several cleanups the total memory footprint for builds with FTP and/or proxy support disabled has been reduced.

curl now also checks for its default “config file” in the path mentioned above.

DNS options that need c-ares now fail without it

The command line tool offers a set of functions to control DNS specific details, and since those options only work if libcurl was built to use c-ares and not at all if it was built to use another resolver backend, curl will now correctly return error when one of those options are used when libcurl can’t execute them.

If there is a trailing dot after the host name in the URL, that dot is now kept in the name when used everywhere internally – except for the SNI field in TLS.

Even while obviously very rare, curl could wrongly return an “end of transfer” prematurely before this fix.