The IETF working group QUIC has its first interim meeting in Tokyo Japan for three days. Day one is today, January 24th 2017.

As I’m not there physically, I attend the meeting from remote using the webex that’s been setup for this purpose, and I’ll drop in a little screenshot below from one of the discussions (click it for hires) to give you a feel for it. It shows the issue being discussed and the camera view of the room in Tokyo. I run the jabber client on a different computer which allows me to also chat with the other participants. It works really well, both audio and video are quite crisp and understandable. 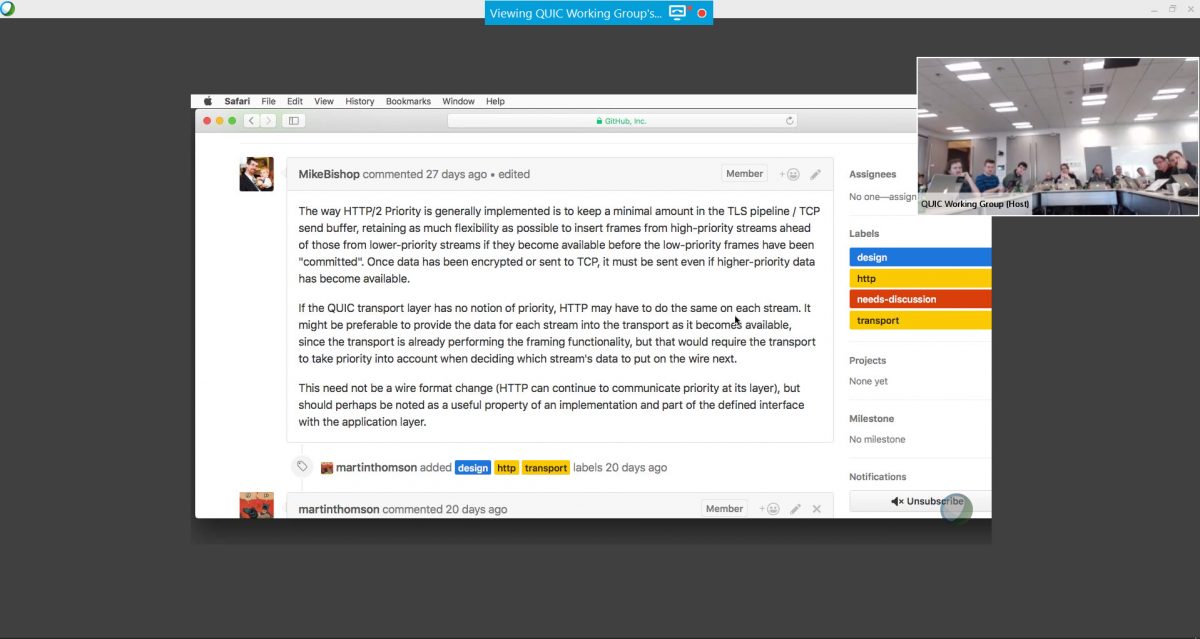 Japan is eight hours ahead of me time zone wise, so this meeting  runs from 01:30 until 09:30 Central European Time. That’s less comfortable and it may cause me some troubles to attend the entire thing.

We started off at once with a lot of discussions on basic issues. Versioning and what a specific version actually means and entails. Error codes and how error codes should be used within QUIC and its different components. Should the transport level know about priorities or shouldn’t it? How is the security protocol decided?

Everyone who is following the QUIC issues on github knows that there are plenty of people with a lot of ideas and thoughts on these matters and this meeting shows this impression is real.

For a casual bystander, you might’ve been fooled into thinking that because Google already made and deployed QUIC, these issues should be if not already done and decided, at least fairly speedily gone over. But nope. I think there are plenty of indications already that the protocol outputs that will come in the end of this process, the IETF QUIC will differ from the Google QUIC in a fair number of places.

The plan is that the different QUIC drafts (there are at least 4 different planned RFCs as they’re divided right now) should all be “done” during 2018.

(At 4am, the room took lunch and I wrote this up.)