On June 26th 2017, Daniel was denied to travel to the US - while still having a valid ESTA and passport. He was then denied ESTA on April 3, 2018. When subsequently applying for a visa instead, there has been no response for over two years. (To visit, not to apply for permanent residency.)

This page was edited with new content on: November 9, 2020

The one year anniversary: One year in still no visa.

937 days since my application, I have a visa in my passport. Valid for 10 years.

As an unexpected bonus, there's also a 30 days "NIE" (National Interest Exception) that allows me a single entry to the US during "PP" (Presidential Proclamations) - which is restricting travels to the US from the European Schengen zone.

"There's a package being delivered to you"

Please send in your passport

On October 13, 2020 (910 days in), the embassy emailed me again, asking me to "Please send in your passport for further processing."

On October 16, I mailed it to the embassy.

So I need to provide updated plans and "invitation letters"...

It seems reasonable to suspect that the embassy woke up and realized this after having being prodded by the congressman's email a few days ago. The travel plans have been outdated for the last 800 days or so and they only email to ask this now?

On October 2, 220 (898 days in) I responded to the email with an invitation letter with an offer to visit my colleagues at wolfSSL in the US at two different future dates (one in December 2020, one in March 2021) and "All expenses, hotel, airfare, transportation and food will be paid for him". Signed by Larry Stefonic, CEO of wolfSSL.

Do you know why this takes so long?

No. They've just informed me "someone is working on it" and that it "may take a long time" but without qualifying what that means. They call it "administrative processing."

I have talked to several persons who've experienced similar situations, and I have learned about waiting times up to 20 months until a definite "no". I used to think of that as a sort of "worst case" waiting time. Now we know it can take longer...

Why don't you just apply for an ESTA?

I already did and they denied me that. See one of the images below.

Why did they deny you ESTA?

I don't know as they won't tell. And I also don't know why they can't respond to my visa application.

So, someone is working on it?

Allegedly, yes. I'm sure that person must be working very hard...

Do you think they will grant you a visa eventually?

Someone emailed me and explained how they got their visa approved after 10 months waiting - so it obviously can happen after a fairly long time!

Did you travel to any arab countries, middle-east, North Korea, Sudan, Iran or Iraq?

Did you ever visit the US?

Yes, I have visted the US around a dozen times over a time period of almost twenty years. I have applied and gotten ESTA permissions several times. I have many friends living and working in the US.

My latest visit to the US was in December 2016 - using the same ESTA and passport I subsequently wanted to use in the summer of 2017 when I was first denied travelling to the US.

How many trips have this blocked you from taking so far?

I have been invited personally to several meetings in the US that I couldn't attend. (excluding IETF, HTTPbis or QUIC meetings)

Can't your employer help you?

We've already tried all available ways to get information or otherwise bring this effort forward. To no avail.

Will Mozilla move more meetings outside of the US?

Yes. Several of the coming All hands are now planned and scheduled to happen outside of the US, for example in Canada and Germany. But I will not be there to experience them since I quit Mozilla in December 2018.

Will your visa situation change when you've quit Mozilla?

Unfortunately, there is no reason to suspect or hope so.

Maybe they lost your application?

I emailed them in July 2019 just to make sure they just hadn't forgot about my case or similar over the past year, and I received their reply on August 1st 2019. The response said "I have forwarded your email to my supervisor to highlight the problem." - but then nothing more came.

What do you think is the most likely explanation for this treatment?

I think one of the likelier explantions is that someone somewhere has found my name and my code used in some evil or malicious manner and drawn the wrong conclusions about how my code ended up there or how I could've been involved. Like for example in some malware, virus or other attack software. I make tools and code available for free and openly and sometimes those are unfortunately used in ways I don't condone.

Since they won't tell me why, basically all theories are equally likely. We just won't know.

Any other plausible explanations?

People have mentioned my domain name haxx.se or suggested it is because I have referred to myself as "a hacker" at times. I find that unlikely since I used the domain and used the term for decades before this.

Others have offered the explanation that the immigration authorities might've decided that I violated the ESTA rules in a previous visit. I can of course not know what they think, but I have not violated those rules.

Convicted of a crime?

No, I have never been convicted of a crime in Sweden and not anywhere else. Not even charged. Nor have I ever been involved in a lawsuit of any kind.

Can you change the curl license?

Lots of people suggest this, most probably in jest, but let me be perfectly clear: no I won't change the curl license.

During the Corona pandemic (starting in spring 2020), the US has closed its borders for a lot of more people who otherwise would have been allowed entry. I suspect the visa processing has slowed down during this period since people can't go there anyway. But I have not been notified about anything and I still expect to get a rejection at some point. Pandemic or not.

Have you contacted any US officials?

A US citizen friend of mine sent the following text in an email to the U.S. Congressman Gerry Connolly on September 3, 2020.

Subsequently, this congressman's office queried the US embassy in Stockholm about the case and on September 17, 2020 (884 days since the interview) the US embassy responded. Here's the relevant part of the answer:

This is what the online visa application status site showed for my case on July 30, 2019: 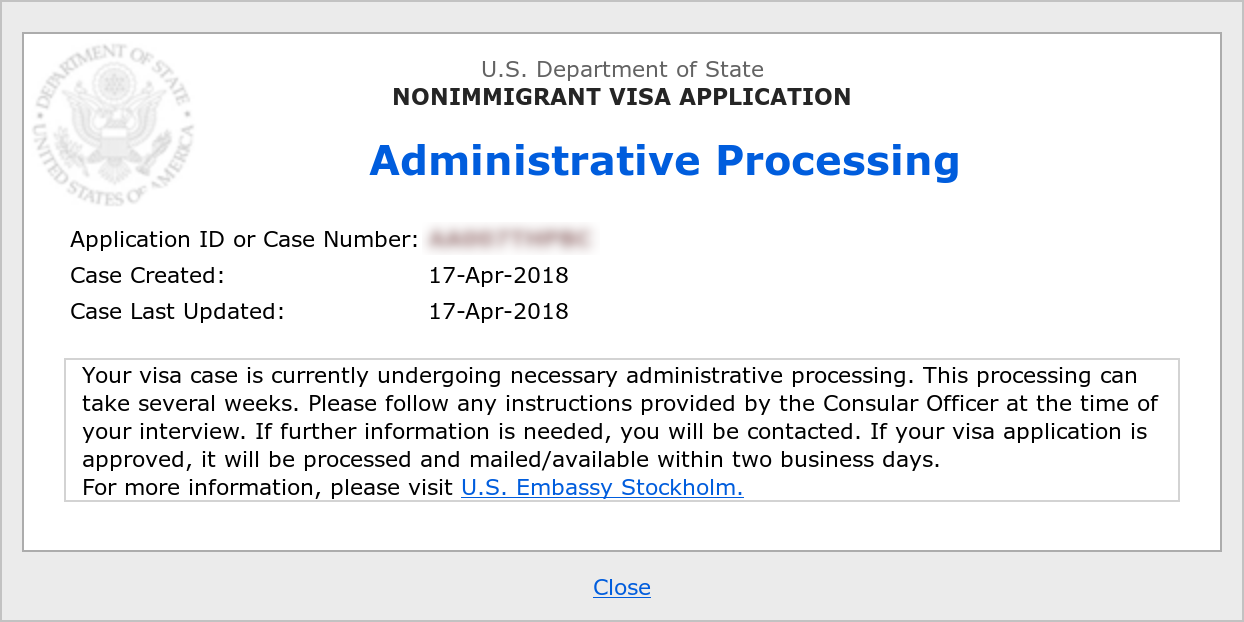 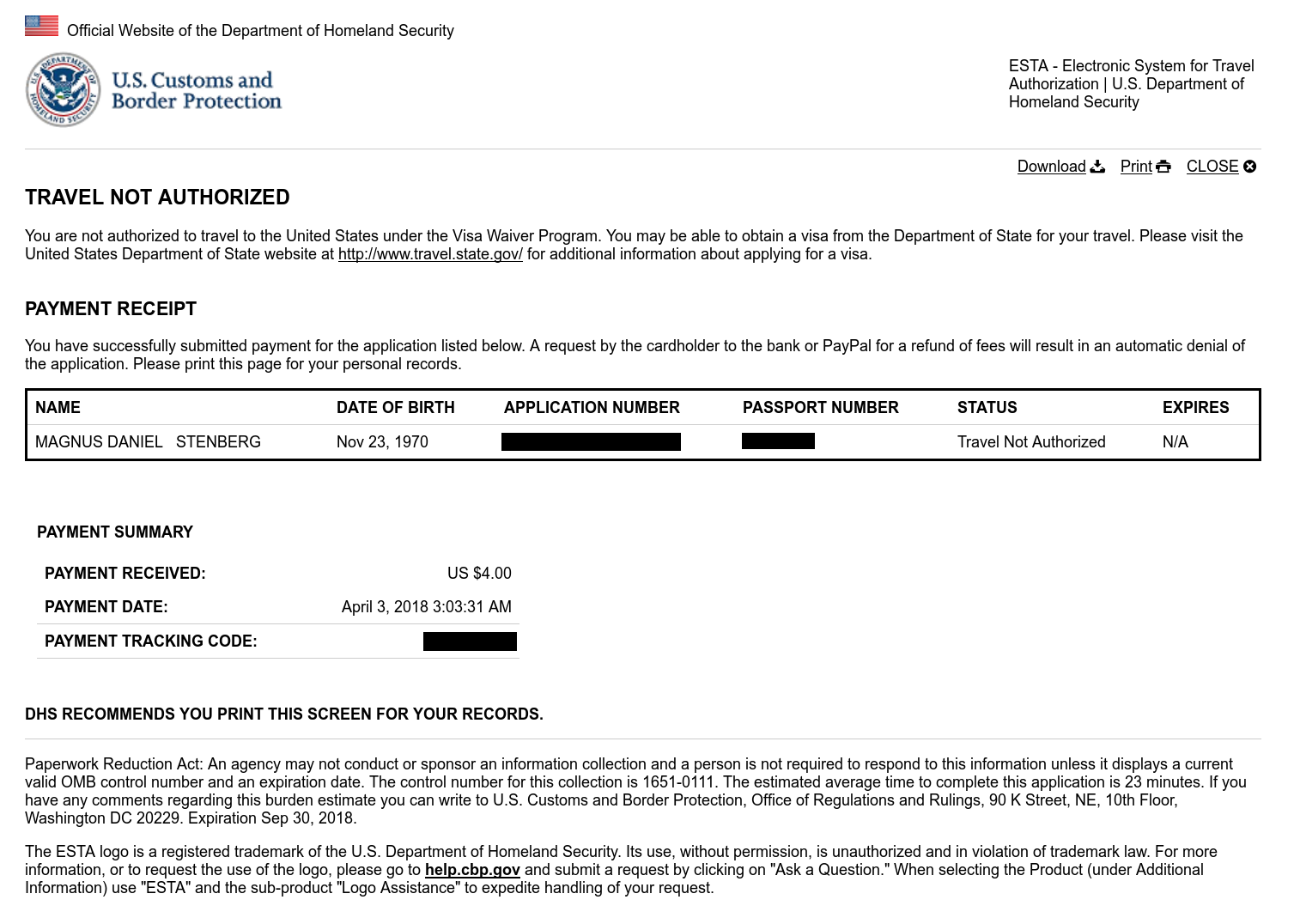