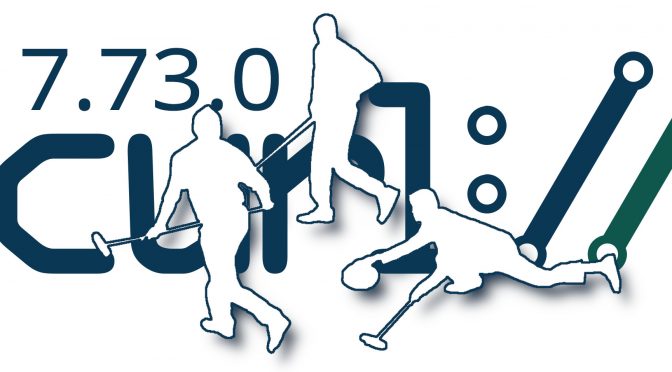 In international curling competitions, each team is given 73 minutes to complete all of its throws. Welcome to curl 7.73.0.

We have to look back almost two years to find a previous release packed with more new features than this! The nine changes we’re bringing to the world this time are…

Tell curl where to store the file when you use -o or -O! Requested by users for a long time. Now available!

If this environment variable is set and there’s a .curlrc in there, it will now be used in preference to the other places curl will look for it.

The huge wall of text that --help previously gave us is now history. “curl --help” will now only show a few important options and the rest is provided if you tell curl which category you want to list help for. Requested by users for a long time.

API for meta-data about easy options

With three new functions, libcurl now provides an API for getting meta-data and information about all existing easy options that an application (possibly via a binding) can set for a transfer in libcurl.

We’ve introduced a new error code, and what makes this a little extra note-worthy besides just being a new way to signal a particular error, is that applications that receive this error code can also query libcurl for extended error information about what exactly in the proxy use or handshake that failed. The extended explanation is extracted with the new CURLINFO_PROXY_ERROR.

This is the first curl release where MQTT support is enabled by default. We’ve had it marked experimental for a while, which had the effect that virtually nobody actually used it, tried it or even knew it existed. I’m very eager to get some actual feedback on this…

The “quote” functionality in curl which can sends custom commands to the SFTP server to perform various instructions now also supports atime and mtime for setting the access and modification times of a remote file.

Assuming you use the supported backend, you can now select which curves libcurl should use in the TLS handshake, with CURLOPT_SSL_EC_CURVES for libcurl applications and with --curves for the command line tool.

As always, here follows a small selection of the many bug-fixes done this cycle.

Born in May 2001, this script was introduced to build configure etc so that you can run configure etc, when you’re building code straight from git (even if it was CVS back in 2001).

The text that was previously output, saying that the cmake build has glitches has been removed. Not really because it has gotten much better, but to not scare people away, let them proceed and use cmake and then report problems and submit pull requests that fix them!

curl: lots of dynbuf in the tool

The libcurl internal system for doing “dynamic buffers” (strings) is now also used by the curl tool and a lot of custom realloc logic has been converted over.

etag: save and use the full received contents

We changed the handling of saving and loading etags a little bit, so that it now stores and loads the full etag contents and not just the bytes between double quotes. This has the added benefit that the etag functionality now also works with weak etags and when working with servers that don’t really follow the syntax rules for etags.

Getting a 550 response back from a SIZE command will now make curl return at once saying the file is missing. Previously it would put that into the generic “SIZE doesn’t work” pool of errors, but that could lead to some inconsistent return codes.

Turns out that when uploading data to an FTP server, there’s a dedicated response code for the server to tell the client when the disk system is full (there was not room enough to store the file) and since there was also an existing libcurl return code for it, this new mapping thus made perfect sense…

The FTP code would previously wrongly consider a HTTPS proxy to euqal *using TLS” as if it was using TLS for its control channel, which made it wrongly use commands that are reserved for TLS connections.

Some adjustments were necessary to make sure the SCP and SFTP work when spoken over an HTTPS proxy. Also note that this fix is only done for the libssh2 backend (primarily because I didn’t find out to do it in the others when I did a quick check).

I blogged about this malloc reducing adventure separately. The command sending function in curl for FTP, IMAP, POP3 and SMTP now reuses the same memory buffer much better over a transfer’s lifetime.

One of the really nice benefits of “preprocessing” the text files and generate another file that is actually used for running tests, is that we now can provide meta-instructions to generate content when the test starts up. For example, we had tests that had a megabyte or several hundred kilobytes of text for test purposes, and how we can replace those with just a single %repeat% instruction. Makes test cases much smaller and much easier to read. %hex% can generate binary output given a hex string.

The test suite now knows which version of curl it tests, which means it can properly verify the User-Agent: headers in curl’s outgoing HTTP requests. We’ve previously had a filter system that would filter out such headers before comparing. Yours truly then got the pleasure of updating no less than 619 test cases to longer filter off that header for the comparison and instead use %VERSION!

Apparently version 2 has been supported in Windows since Windows 95…

Unless we’ve screwed up somewhere, the next release will be 7.74.0 and ship on December 9, 2020. We have several pending pull-requests already in the queue with new features and changes!