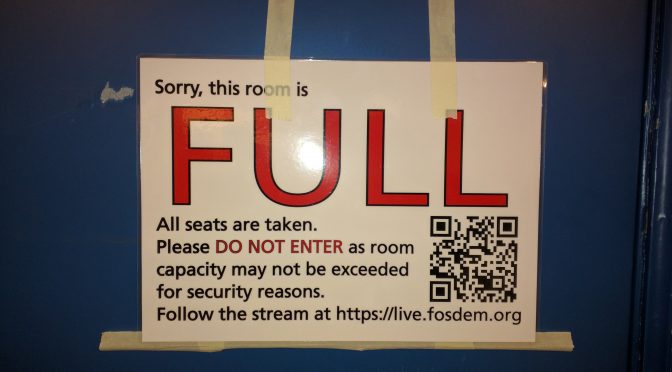 I didn’t present anything during last year’s conference, so I submitted my DNS-over-HTTPS presentation proposal early on for this year’s FOSDEM. Someone suggested it was generic enough I should rather ask for main track instead of the DNS room, and so I did. Then time passed and in November 2018 “HTTP/3” was officially coined as a real term and then, after the Mozilla devroom’s deadline had been extended for a week I filed my second proposal. I might possibly even have been an hour or two after the deadline. I hoped at least one of them would be accepted.

Not only were both my proposed talks accepted, I was also approached and couldn’t decline the honor of participating in the DNS privacy panel. Ok, three slots in the same FOSDEM is a new record for me, but hey, surely that’s no problems for a grown-up..

I of coursed hoped there would be interest in what I had to say.

I spent the time immediately before my talk with a coffee in the awesome newly opened cafeteria part to have a moment of calmness before I started. I then headed over to the U2.208 room maybe half an hour before the start time.

It was packed. Quite literally there were hundreds of persons waiting in the area outside the U2 rooms and there was this totally massive line of waiting visitors queuing to get into the Mozilla room once it would open.

People don’t know who I am by my appearance so I certainly didn’t get any special treatment, waiting for my talk to start. I waited in line with the rest and when the time for my presentation started to get closer I just had to excuse myself, leave my friends behind and push through the crowd. I managed to get a “sorry, it’s full” told to me by a conference admin before one of the room organizers recognized me as the speaker of the next talk and I could walk by a very long line of humans that eventually would end up not being able to get in. The room could fit 170 souls, and every single seat was occupied when I started my presentation just a few minutes late.

This presentation could have filled a much larger room. Two years ago my HTTP/2 talk filled up the 300 seat room Mozilla had that year.

The slides from my HTTP/3 presentation.

I tend to need a little “landing time” after having done a presentation to cool off an come back to normal senses and adrenaline levels again. I got myself a lunch, a beer and chatted with friends in the cafeteria (again). During this conversation, it struck me I had forgotten something in my coming presentation and I added a slide that I felt would improve it (the screenshot showing “about:networking#dns” output with DoH enabled). In what felt like no time, it was again to move. I walked over to Janson, the giant hall that fits 1,470 persons, which I entered a few minutes ahead of my scheduled time and began setting up my machine.

I started off with a little technical glitch because the projector was correctly detected and setup as a second screen on my laptop but it would detect and use a too high resolution for it, but after just a short moment of panic I lowered the resolution on that screen manually and the image appeared fine. Phew! With a slightly raised pulse, I witnessed the room fill up. Almost full. I estimate over 90% of the seats were occupied.

This was a brand new talk with all new material and I performed it for the largest audience I think I’ve ever talked in front of.

To no surprise, my talk triggered questions and objections. I spent a while in the corridor behind Janson afterward, discussing DoH details, the future of secure DNS and other subtle points of the different protocols involved. In the end I think I manged pretty good, and I had expected more arguments and more tough questions. This is after all the single topic I’ve had more abuse and name-calling for than anything else I’ve ever worked on before in my 20+ years in Internet protocols. (After all, I now often refer to myself and what I do as webshit.)

My DNS over HTTPS slides.

I never really intended to involve myself in DNS privacy discussions, but due to the constant misunderstandings and mischaracterizations (both on purpose and by ignorance) sometimes spread about DoH, I’ve felt a need to stand up for it a few times. I think that was a contributing factor to me getting invited to be part of the DNS privacy panel that the organizers of the DNS devroom setup.

There are several problems and challenges left to solve before we’re in a world with correctly and mostly secure DNS. DoH is one attempt to raise the bar. I was content to had the opportunity to really spell out my view of things before the DNS privacy panel.

While sitting next to these giants from the DNS world, Stéphane Bortzmeyer, Bert Hubert and me discussed DoT, DoH, DNS centralization, user choice, quad-dns-hosters and more. The discussion didn’t get very heated but instead I think it showed that we’re all largely in agreement that we need more secure DNS and that there are obstacles in the way forward that we need to work further on to overcome. Moderator Jan-Piet Mens did an excellent job I think, handing over the word, juggling the questions and taking in questions from the audience.

Appearing in three scheduled slots during the same FOSDEM was a bit much, and it effectively made me not attend many other talks. They were all great fun to do though, and I appreciate people giving me the chance to share my knowledge and views to the world. As usually very nicely organized and handled. The videos of each presentation are linked to above.

I met many people, old and new friends. I handed out a lot of curl stickers and I enjoyed talking to people about my recently announced new job at wolfSSL.

After ten consecutive annual visits to FOSDEM, I have appeared in ten program slots!

I fully intend to go back to FOSDEM again next year. For all the friends, the waffles, the chats, the beers, the presentations and then for the waffles again. Maybe I will even present something…