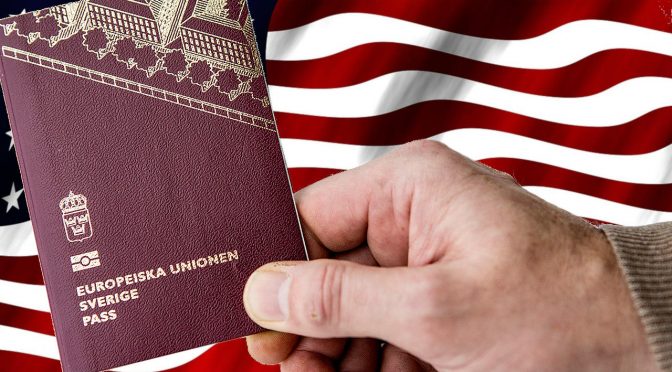 Here’s the complete timeline of events. From my first denial to travel to the US until I eventually received a tourist visa. And then I can’t go anyway.

I spent a week on Hawaii with Mozilla – my employer at the time. This was my 12th visit to the US over a period of 19 years. I went there on ESTA, the visa waiver program Swedish citizens can use. I’ve used it many times, there was nothing special this time. The typical procedure with ESTA is that we apply online: fill in a form, pay a 14 USD fee and get a confirmation within a few days that we’re good to go.

In the early morning one day by the check-in counter at Arlanda airport in Sweden, I was refused to board my flight. Completely unexpected and out of the blue! I thought I was going to San Francisco via London with British Airways, but instead I had to turn around and go back home – slightly shocked. According to the lady behind the counter there was “something wrong with my ESTA”. I used the same ESTA and passport as I used just fine back in December 2016. They’re made to last two years and it had not expired.

People engaged by Mozilla to help us out could not figure out or get answers about what the problem was (questions and investigations were attempted both in the US and in Sweden), so we put our hopes on that it was a human mistake somewhere and decided to just try again next time.

I missed the following meeting (in December 2017) for other reasons but in the summer of 2018 another Mozilla all-hands meeting was coming up (in Texas, USA this time) so I went ahead and applied for a new ESTA in good time before the event – as I was a bit afraid there was going to be problems. I was right and I got denied ESTA very quickly. “Travel Not Authorized”.

Gaaah. It meant it was no mistake last year, they actually mean this. I switched approach and instead applied for a tourist visa. I paid 160 USD, filled in a ridiculous amount of information about me and my past travels over the last 15 years and I visited the US embassy for an in-person interview and fingerprinting.

This is day 0 in the visa process, 296 days after I was first stopped at Arlanda.

I missed the all-hands meeting in San Francisco when I didn’t get the visa in time.

I quit Mozilla, so I then had no more reasons to go to their company all-hands…

A year passed. “someone is working on it” the embassy email person claimed when I asked about progress.

I emailed the embassy to query about the process

The reply came back quickly:

All applications are processed in the most expeditious manner possible. While we understand your frustration, we are required to follow immigration law regarding visa issuances. This process cannot be expedited or circumvented. Rest assured that we will contact you as soon as the administrative processing is concluded.

Another year had passed and I had given up all hope. Now it turned into a betting game and science project. How long can they actually drag out this process without saying either yes or no?

A friend of mine, a US citizen, contacted his Congressman – Gerry Connolly – about my situation and asked for help. His office then subsequently sent a question to the US embassy in Stockholm asking about my case. While the response that arrived on September 17 was rather negative…

… I think the following turn of events indicates it had an effect. It unclogged something.

After 889 days since my interview on the embassy (only five days after the answer to the congressman), the embassy contacted me over email. For the first time since that April day in 2018.

My travel plans – that had been out of date for the last 800 days or so – suddenly needed to be updated! As I was already so long into this process and since I feared that giving up now would force me back to square one if I would stop now and re-attempt this again at a later time, I decided to arrange myself some updated travel plans. After all, I work for an American company and I have a friend or two there.

I replied to the call for travel plan details with an official invitation letter attached, inviting me to go visit my colleagues at wolfSSL signed by our CEO, Larry. I really want to do this at some point, as I’ve never met most of them so it wasn’t a made up reason. I could possibly even get some other friends to invite me to get the process going but I figured this invite should be enough to keep the ball rolling.

I got another email. Now at 910 days since the interview. The embassy asked for my passport “for further processing”.

I posted my passport to the US embassy in Stockholm. I also ordered and paid for “return postage” as instructed so that they would ship it back to me in a safe way.

At 10:30 in the morning my phone lit up and showed me a text telling me that there’s an incoming parcel being delivered to me, shipped from “the Embassy of the United State” (bonus points for the typo).

I received my passport. Inside, there’s a US visa that is valid for ten years, until November 2030.

As a bonus, the visa also comes with a NIE (National Interest
Exception) that allows me a single entry to the US during the PP (Presidential Proclamations) – which is restricting travels to the US from the European Schengen zone. In other words: I am actually allowed to travel right away!

The timing is fascinating. The last time I was in the US, Trump hadn’t taken office yet and I get the approved visa in my hands just days after Biden has been announced as the next president of the US.

Covid-19 is still over us and there’s no end in sight of the pandemic. I will of course not travel to the US or any other country until it can be deemed safe and sensible.

When the pandemic is under control and traveling becomes viable, I am sure there will be opportunities. Hopefully the situation will improve before the visa expires.

All my family and friends, in the US and elsewhere who have supported me and cheered me up through this entire process. Thanks for keeping inviting me to fun things in the US even though I’ve not been able to participate. Thanks for pushing for events to get organized outside of the US! I’m sorry I’ve missed social gatherings, a friend’s marriage and several conference speaking opportunities. Thanks for all the moral support throughout this long journey of madness.

A special thanks go to David (you know who you are) for contacting Gerry Connolly’s office. I honestly think this was the key event that finally made things move in this process.