Three years ago I talked on a changelog episode about curl just having turned 17 years old and what it has meant for me etc.

Fast forward three years, 146 changelog episodes later and now curl has turned 20 years and I was again invited and joined the lovely hosts of the changelog podcast, Adam and Jerod.

We talked curl of course but we also spent time talking about where HTTP/2 is and how QUIC is coming around and a little about why and how its UDP nature makes things a little different. If you’re into either curl or web transport, I hope you’ll find it interesting. 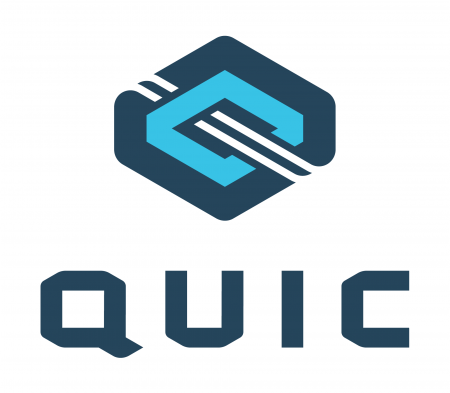 curl 7.60.0 is released. Remember 7.59.0? This latest release cycle was a week longer than normal since the last was one week shorter and we had this particular release date adapted to my traveling last week. It gave us 63 days to cram things in, instead of the regular 56 days.

7.60.0 is a crazy version number in many ways. We’ve been working on the version 7 series since virtually forever (the year 2000) and there’s no version 8 in sight any time soon. This is the 174th curl release ever.

I believe we shouldn’t allow the minor number to go above 99 (because I think it will cause serious confusion among users) so we should come up with a scheme to switch to version 8 before 7.99.0 gets old. If we keeping doing a new minor version every eight weeks, which seems like the fastest route, math tells us that’s a mere 6 years away.

In the 63 days since the previous release, we have done and had..

Our tireless and fierce army of security researches keep hammering away at every angle of our code and this has again unveiled vulnerabilities in previously released curl code:

When you tell libcurl to use a larger buffer size, that larger buffer size is not used for the shut down of an FTP connection so if the server then sends back a huge response during that sequence, it would buffer-overflow a heap based buffer.

The header parser function would sometimes not restore a pointer back to the beginning of the buffer, which could lead to a subsequent function reading out of buffer and causing a crash or potential information leak.

There are also two new features introduced in this version:

HAProxy has pioneered this simple protocol for clients to pass on meta-data to the server about where it comes from; designed to allow systems to chain proxies / reverse-proxies without losing information about the original originating client. Now you can make your libcurl-using application switch this on with CURLOPT_HAPROXYPROTOCOL and from the command line with curl’s new –haproxy-protocol option.

Over six years ago, I blogged on how round robin DNS doesn’t really work these days. Once upon the time the gethostbyname() family of functions actually returned addresses in a sort of random fashion, which made clients use them in an almost random fashion and therefore they were spread out on the different addresses. When getaddrinfo() has taken over as the name resolving function, it also introduced address sorting and prioritizing, in a way that effectively breaks the round robin approach.

Now, you can get this feature back with libcurl. Set CURLOPT_DNS_SHUFFLE_ADDRESSES to have the list of addresses shuffled after resolved, before they’re used. If you’re connecting to a service that offer several IP addresses and you want to connect to one of those addresses in a semi-random fashion, this option is for you.

There’s no command line option to switch this on. Yet.

We did many bug fixes for this release as usual, but some of my favorite ones this time around are…

libcurl-using applications that add more transfers than what can be sent over the wire immediately (usually because the application as set some limitation of the parallelism libcurl will do) can be held “pending” by libcurl. They’re basically kept in a separate queue until there’s a chance to send them off. They will then be attempted to get started when the streams than are in progress end.

The algorithm for retrying the pending transfers were quite naive and “brute-force” which made it terribly slow and in effective when there are many transfers waiting in the pending queue. This slowed down the transfers unnecessarily.

With the fixes we’ve landed in7.60.0, the algorithm is less stupid which leads to much less overhead and for this setup, much faster transfers.

When using a libcurl version that is built to use a threaded resolver, there’s no socket to wait for during the name resolving phase so we’ve often recommended users to just wait “a short while” during this interval. That has always been a weakness and an unfortunate situation.

Starting now, curl_multi_timeout() will return suitable timeout values during this period so that users will no longer have to re-implement that logic themselves. The timeouts will be slowly increasing to make sure fast resolves are detected quickly but slow resolves don’t consume too much CPU.

The cookie code in libcurl was keeping them all in a linear linked list. That’s fine for small amounts of cookies or perhaps if you don’t manipulate them much.

Users with several hundred cookies, or even thousands, will in 7.60.0 notice a speed increase that in some situations are in the order of several magnitudes when the internal representation has changed to use hash tables and some good cleanups were made.

We figure out some problems in libcurl’s handling of GOAWAY, like when an application wants to do a bunch of transfers over a connection that suddenly gets a GOAWAY so that libcurl needs to create a new connection to do the rest of the pending transfers over.

Turns out nginx ships with a config option named http2_max_requests that sets the maximum number of requests it allows over the same connection before it sends GOAWAY over it (and it defaults to 1000). This option isn’t very well explained in their docs and it seems users won’t really know what good values to set it to, so this is probably the primary reason clients see GOAWAYs where there’s no apparent good reason for them.

Setting the value to a ridiculously low value at least helped me debug this problem and improve how libcurl deals with it!

We’ve supported transfers with libcurl on non-ASCII platforms since early 2007. Non-ASCII here basically means EBCDIC, but the code hasn’t been limited to those.

However, due to this being used by only a small amount of users and that our test infrastructure doesn’t test this feature good enough, we slipped recently and broke libcurl for the non-ASCII users. Work was put in and changes were landed to make sure that libcurl works again on these systems! 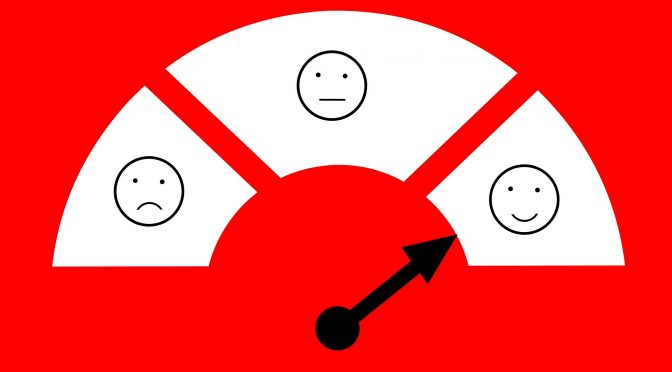 The curl user survey 2018 is up. If you ever use curl or libcurl, please donate some of your precious time and provide your answers!

The curl user survey is an annual tradition since 2014 and it is one of our primary ways to get direct feedback from a larger audience about what’s good, what’s bad and what to focus on next in the curl project. Your input really helps us!

The survey will be up and available to fill in during 14 days, from May 15th until the end of May 28th. Please help us share this and ask your curl using friends to join in as well.

If you submitted data last year, make sure you didn’t miss the analysis of the 2017 survey. 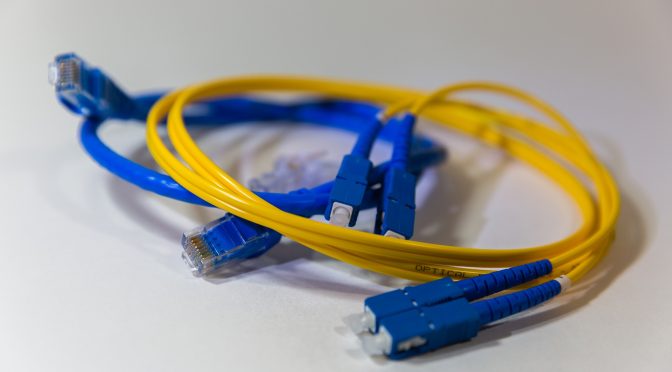 A little over six years since I got the fiber connection installed to my house. Back then, on a direct question to my provider, they could only offer 100/100 mbit/sec so that’s what I went with. Using my Telia Öppen Fiber and Tyfon (subsequently bought by Bahnhof) as internet provider.

In the spring of 2017 I bumped the speed to 250/100 mbit/sec to see if I would notice and actually take advantage of the extra speed. Lo and behold, I actually feel and experience the difference – frequently. When I upgrade my Linux machines or download larger images over the Internet, I frequently do that at higher speeds than 10MB/sec now and thus my higher speed saves me time and offers improved convenience.

However, “Öppen Fiber” is a relatively expensive provider for little gain for me. The “openness” that allows me to switch between providers isn’t really something that gives much benefit once you’ve picked a provider you like, it’s then mostly a way for a middle man to get an extra cut. 250mbit/sec from Bahnhof cost me 459 SEK/month (55 USD) there.

Switching to Bahnhof to handle both the fiber and the Internet connection is a much better deal for me, price wise. I get an upgraded connection to a 1000/1000 mbit/sec for a lower monthly fee. I’ll now end up paying 399/month (48 USD)  (299 SEK/month the first 24 months). So slightly cheaper for much more speed!

My household typically consists of the following devices that are used for accessing the web regularly:

Our family of 4 consumes around 120GB average weeks. Out of this, Youtube is the single biggest hogger with almost 30% of our total bandwidth. I suppose this says something about the habits of my kids…

Out of these 13 most frequently used devices in our local network only 5 are RJ45-connected, the rest are WiFi.

I was told the switch-over day was May 15th, and at 08:28 in the morning my existing connection went away. I took that as the start signal. I had already gotten a box from Bahnhof with the new media converter to use. 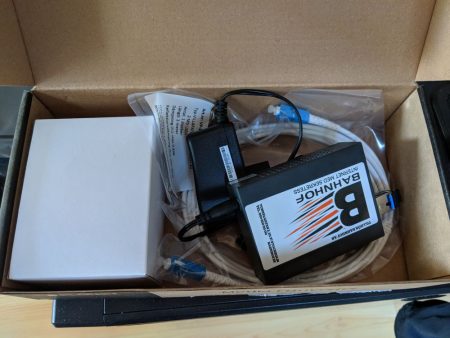 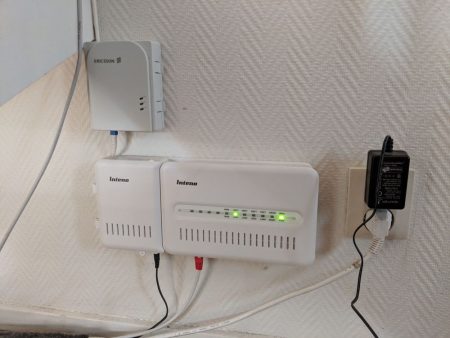 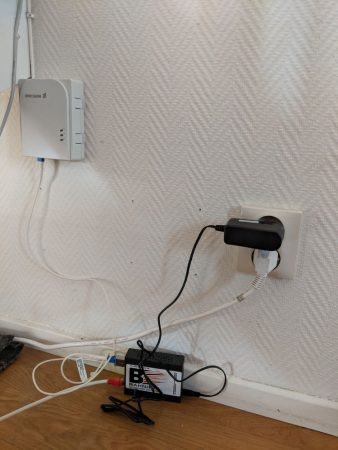 You can also see the Ethernet cable already jacked in.

Once connected, I got a link at once and then I spent another few minutes to try to “register” with my user name and password until I figured out that my router has 1.1.1.1 hardcoded as DNS server and once I cleared that, the login-thing worked as it should and I could tell Bahnhof that I’m a legitimate user and woof, my mosh session magically reconnected again etc.

All in all, I was offline for shorter than 30 minutes.

These days a short round-trip is all the rage and is often more important than high bandwidth when browsing the web. I’m apparently pretty close to the Stockholm hub for many major services and I was a bit curious how my new operator would compare.

To my amazement, it’s notably faster. google.com went from 2.3ms to 1.3ms ping time, 1.1.1.1 is at 1.3ms, facebook.com is 1.0ms away.  My own server is 1.2ms away and amusingly even if I’m this close to the main server hosting the curl web site, the fastly CDN still outperforms it so curl.haxx.se is an average 1.0ms from me.

So, the ping times were notably reduced. The bandwidth is truly at gigabit speeds in both directions according to bredbandskollen.se, which is probably the most suitable speed check site in Sweden.

A rather smooth change so far. Let’s hope it stays this way.